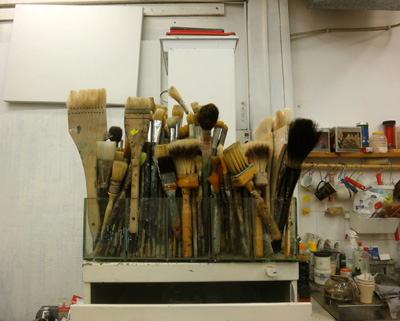 Lives and works in Tel Aviv

Born in Israel in 1952
Lives and works in Tel Aviv, Israel

I am a multi-disciplinary artist, working mostly with mixed techniques or different forms of "double languages" employed to blur the boundaries between one medium and another, and as a contributing factor to the elements that connect and/or disassociate the medium with the image.

The various media I use exist within a visual spectrum, which examines the same subjects from different vantage points, thereby expressing what might be called "plastic commentaries" – that is, art work designed to show the connection between different cultural fields.

Lately I have been utilizing a number of techniques such as hand-drawn images combined with digital and photographic processing, needlework on ready-made materials, and painting-drawing on canvas and paper. The scale of my work varies from small art works to very large painted or drawn installations, which often act to set a physical or virtual space in motion.

My body of work is seemingly divided into various series which differ in the medium chosen or their thematic subjects. However, a second glance shows that all of the works center on the process of building an individual or collective identity. Among the major serial works I've produced over the past few years are "Threshold" (hand-drawn and digital images of domestic/architectural spaces;  "Plans for Dwelling Places" (different examples of residential and institutional architecture); "Polania/Witch" (a series of machine-sewn images on school exercise-books), and others. I tend to think about identity as a culturally-driven consumer product, in other words, consumerism that forms identity and the opposite. As such, my works borrow from the cultural traits that influence a consciousness needed to establish identity. These traits find expression in a number of key cultural fields such as architecture (space and body), language and slang, definition and exclusion, and so forth. They all correlate with my personal-autobiographical space, which consists of queries related to existence, such as physical survival as opposed to emotional survival: memories, humor, collective and personal history. A common denominator includes the use of power mechanisms by designers/planners and disciplinarians to influence individuals.

There is a fundamental significance to the use of a variety of materials in the works, since the medium, from my point of view, usually acts as a "dynamic metaphor." The medium itself influences content and is an element that plays a role in formulating the idea. Inherent in the conceptual and visual foundation of the work is the photograph and the drawing/digital process. Thus one can see, for example, the architectural sketches which act as the juncture between the architect/planner and the client/future occupant. The sketches are a graphic symbol representing a translation of the needs of the client and the abstract intentions of the architect to reach the desired design and the materials needed to complete the project. This element serves the work in the sense that the drawings are based only on the promise of a real structure for a home, but the finished product usually falls short as an expression of the remnants of thought.

The same incomplete or opaque images appear when using machine needlework on exercise-books. Thus a physical and conceptual linear approach exists between the act of sketching and that of sewing. This approach is used not only to suggest an object or an image but also exists as a "blueprint of an action" thereby providing evidence of an inherent process. The evidence points to an incursion on the plan/image or its purpose through human intervention (on my part), which is usually aggressive and chaotic, in spite of its subdued appearance.

2018   'With the passage of time", Rehovot Monicipal Gallery